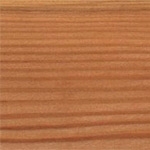 Other Names and Species:
Hackmatack
Tamarack

Appearance:
The sapwood of larch is whitish, while the heartwood is yellowish to russet brown in color. The species has a spiraled or twisted grain and is fairly coarse in texture.

Properties:
Larch has moderate resistance to decay and therefore should be chemically treated prior to installation. The wood is reported to have no odor.

Janka Hardness: 590
As a flooring option, larch falls on the softer end of the Janka hardness chart. It is close in hardness to douglas fir, is roughly forty-five percent as hard as red oak or ash, and about thirty-six as hard as wenge.

Workability:
Larch has not been reported to be difficult to saw properly. The wood holds both nails and glue well. Larch is somewhat difficult to treat with preservatives but does sand fairly well.