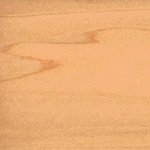 Appearance:
The sapwood of basswood is smooth white to pale brown, while the heartwood is a smooth white to more of a pale pink-brown in color. The species has a straight and fine grain. The wood is of a fine and uniform texture.

Properties:
With basswood, finishing of some sort is reccommended as this species is not known to have a good resistance to attack from organisms. The wood remains smooth under friction and is reported to have a slight odor when freshly milled. Basswood dries easily and degrades very little in the process.

Janka Hardness: 410
As a flooring option, basswood is a very soft wood. It's hardness is under one half that of southern yellow pine, one third that of red oak, one quarter of wenge, and is only approximately one sixth of santos mahogany's ranking of 2200.

Workability:
Basswood is a soft wood and thus responds very easily to machining. Basswood nails easily but its holding properties are only fair due to its softness. Staining is fair due to basswood's soft texture. Varnishes and enamel-based paints hold much better on this species. Care must be taken to avoid denting and marring due to its significant lack of hardness.