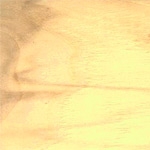 Appearance:
The sapwood of boreal is white to faint yellow, while the heartwood is grayish-white to light brown in color. The species has a figured, straight grain and is uniform and somewhat coarse in texture. The wood's figure becomes more pronounced with staining.

Properties:
Boreal is not overly durable in its exposed form with regards to decay. It is not the best choice in such high risk situations. The wood is reported to have no odor. Boreal can be somewhat difficult to dry properly but does so fairly quickly.

Workability:
Boreal cuts rather easily and cleanly. Boreal glues easily and nails without splitting being reported. This species is generally dificult to sand.