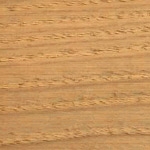 Appearance:
The sapwood of chestnut is white to light brown, while the heartwood is grayish-brown to brown in color. The species has a straight, sometimes spiraled grain and is fairly coarse in texture.

Properties:
Chestnut has a high resistance to decay. The wood remains smooth under friction and is reported to have no odor. Chestnut is diffuclt and time consuming to dry properly.