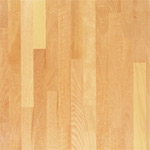 Appearance:
The sapwood of curupixa is light brown while the heartwood is brown to pinkish brown in color. The species has a wavy to straight grain, a moderate luster, and is fine textured.

Properties:
Curupixa has a moderate to high resistance to fungus. The wood is reported to have no odor and air dries rapidly.

Janka Hardness: 1490
As a flooring option, curupixa is one of the least hard and durable woods. It is nearly identical in hardness to hard maple, about fifteen percent harder than red oak, is roughly eighty percent as hard as hickory or pecan, and is almost exactly three quarters as hard as santos mahogany's ranking of 2200.

Workability:
Curupixa is easy to saw and work properly. This species holds both nails and glue well. This species sands fairly well and takes a good finish.