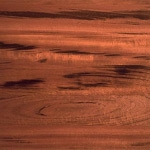 Appearance:
As the alternate name "tigerwood" suggests, goncalo is noted for its bold, characteristic striping. The color of the heartwood of goncalo, when first cut, ranges from russet brown, orange brown, or reddish brown to red, with narrow to wide irregular stripes, which are medium to very dark brown. After exposure, the wood turns red, brown, or dark reddish brown, and the stripes become nearly black. The sharply demarcated sapwood is a dingy gray or brownish-white. The grain varies between straight and wavy, and the uniform texture ranges between fine and medium, uniform. The dark longitudinal bands in the wood make for a very striking figure.

Properties:
Goncalo is 70% harder than red oak, so it has a reputation for being extremely durable, and it has been shown to be highly resistant to white-rot and brown-rot. Goncalo resists moisture absorption, and so it weathers very well — it makes a beautiful wood floor with a unique contrasting pattern of stripes, which tends to mellow over time.

Janka Hardness: 1850
As a flooring option, tigerwood is one of the harder and more durable woods. It falls between hickory or pecan and purpleheart in hardness, is nearly ninety-six percent as hard as merbau, is a little over twenty-seven percent harder than hard maple, and is about eighty-four percent as hard as santos mahogany's ranking of 2200.

Workability:
Despite the high density of this wood, it is not difficult to work. Goncalo finishes very smoothly and takes a high polish.

Principal Uses:
Because of its durability, goncalo rates as one of the best heavy construction timbers. Yet it is also well regarded for use in distinctive wood flooring as well as in fine furniture and cabinet making. It can even be used in decorative veneers and for specialty items such as archery bows, billiard cues, and knife handles.