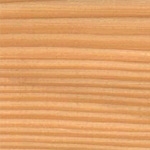 Appearance:
The heartwood and sapwood of hemlock are both light brown with red tinges. The species has an uneven, commonly twisted grain and is medium to coarse in texture.

Properties:
Treatment of the wood of some sort is advised as hemlock has little natural resistance to decay. The wood is reported to have a somewhat sour odor when green. Hemlock is diffuclt to dry properly, as warping is known to occur.

Workability:
Hemlock is somewhat difficult to saw properly. Nailing can be difficult as splitting occassionally occurs in the process. Glue holds well with hemlock flooring. This species sands fairly well but does marr somewhat easily under heavy traffic.