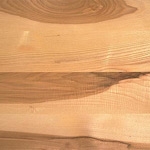 Appearance:
The heartwood of hickory is reddish brown in color with dark brown stripes, while the sapwood tends toward a creamy white with pinkish tones and fine brown lines.

Properties:
Hickory wood is very hard, stiff, dense, and shock resistant, and is difficult to carve.

Janka Hardness: 1820
According to the U.S. Forestry Service pamphlet on Important Trees of Eastern Forests, "there are some woods that are stronger than hickory and some that are harder, but the combination of strength, toughness, hardness, and stiffness found in hickory wood is not found in any other commercial wood."

Workability:
Although a hardwood, hickory works with little difficulty with both hand and power tools. This wood holds screws well, and it glues, stains, and polishes to a very attractive finish. It can be somewhat difficult to sand with flooring equipment because of its hardness.

Hickory is also highly prized for wood-burning stoves, because of its high energy content. Hickory wood is also a preferred type for smoke curing meats, especially in the Southern United States, where hickory is plentiful in the region.