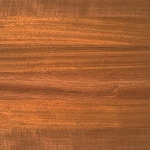 Origin:
From southern Mexico, throughout Central America and the West Indies, to northern Brazil, Bolivia, and Peru.

Appearance:
While the sapwood of jatoba is gray-white, the heartwood tends to a salmon-red to orange-brown color when fresh, becoming russet or reddish brown with dark streaks when seasoned. With its inherent beauty, rich coloring, and extreme hardness, this species is understandably one of our most popular exotic woods.

Properties:
In addition to its warm reddish tint, this moderately lustrous wood is notable for its hardness and durability — jatoba is extremely dense wood and very strong.

Workability:
In view of its high density and interlocked grain, Brazilian cherry is difficult to saw and plane; however, it sands nicely to a smooth surface. Due to its hardness, nailing may require pre-drilling and adjustment of the angle of penetration.

Principal Uses:
Brazilian cherry (jatoba) is frequently used where good shock resistance is needed, such as in wood flooring and tool handles. Other applications include railroad crossties, wheel rims, gear cogs, and other specialty items, as well as furniture and cabinet work.