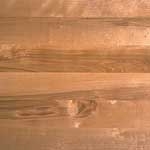 Appearance:
The sapwood of yellow birch ranges from pale white to creamy yellow, while the heartwood tends to be a light-reddish brown with a red tinge. By contrast, the sapwood of sweet birch is light-colored, whereas the heartwood is dark brown with a red tinge. Birch wood has an even texture with a straight, closed grain. Occasionally, boards may show curliness in the grain as well as some wavy figuring. It is among the most featureless of all North American hardwoods; but with its natural, pleasing figure, it makes for very attractive furniture and flooring. Birch has a small degree of luster, making it seem almost dull in appearance.

Properties:
Birch is a very heavy, strong, durable wood. It is hard and stiff, with excellent shock-resistance.

Janka Hardness:
Birch species range from the upper lower end to the upper middle-range of the Janka hardness scale. Paper birch is 910, nine percent softer than teak. Yellow birch is 1260, comparable to white oak (seven percent softer). Sweet birch is ranked at 1470, which is just one percent harder than hard maple.