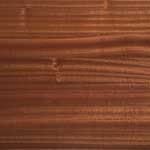 Origin:
West and East Africa, from the Ivory Coast to the Cameroons and eastward through Zaire to Uganda.

Appearance:
The sapwood of sapele tends to whitish or pale yellow and is distinct from the heartwood, which ranges in color from a medium to dark reddish or purplish brown. Sapele is lustrous and fine-textured, with an interlocked grain that is sometimes wavy, producing a narrow, uniform roe figure on quartered surfaces. When cut, it has a cedar-like scent.

Properties:
Sapele is quite durable and seasons rapidly, but with a marked tendency to warp, so careful stacking is required.

Workability:
This wood works equally well with hand and machine tools, and it saws and finishes easily. However, planing the surface tends to tear the interlocked grain. Sapele has good nailing and gluing properties.