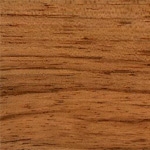 Appearance:
The sapwood of shedua is white to straw colored, while the heartwood is light golden brown to reddish-brown in color. The species has a shallowly interlocked grain, is lusterous, and is fairly coarse and somewhat gummy in texture.

Properties:
Shedua has little natural resistance to termites or decay, and as such should be treated as a preventative measure. The wood remains smooth under friction and is reported to have no odor. Shedua dries rapidly with little degrade resulting from the process.

Workability:
Shedua only slightly dulls cutting surfaces when sawing. Glue and nails hold good with shedua flooring. This species sands and polishes fairly well after filling but can marr easier than some species under heavy traffic.