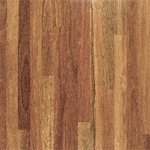 Appearance:
The heartwood of spotted gum ranges from a lighter brown to deep red-brown, while the sapwood is generally white. The texture of spotted gum is somewhat greasy to the touch. The species has an interlocked & wavy grain and possesses a fairly coarse texture.

Properties:
Spotted gum has a high natural resistance to decay. The wood remains smooth under friction and is reported to a slight citrus-like odor. Spotted gum dries fairly easily.

Workability:
Spotted gum works rather easily with both hand and power tools, in part due to the greasy nature of the wood's surface. This species accepts both nails and glue well. It takes stain, paint, and polishing readily and produces a very attractive finish.